A level 1 RAID is often called “mirrored disks” , “duplexed disks”, or “shadowed disks”.
For each disk in the system, a duplicate disk is maintained with an exact copy of the information.
Data redundancy is obvious as every byte is duplicated. 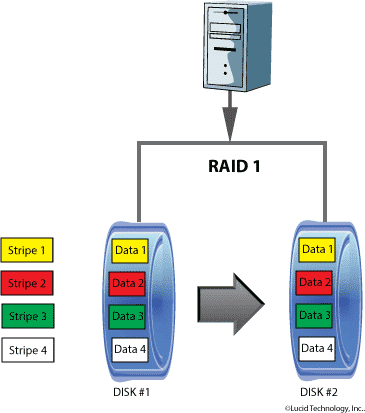 Computing the performance impact is more difficult. With an optimized
filesystem driver or controller, RAID 1 reads can be faster than a
single drive. If we allow both drives containing the duplicate data to
begin seeking together and then use the one that completes the seek
first, our average access time will be better than for a single drive.

RAID 1 writes always require writing to two drives and we end up
suffering a penalty, relative to a single drive, waiting for both drives
to complete the write . However, writes are almost always preceded by a
read (at the faster rate), and the average decrease in seek time for a
read is exactly offset by the average increase in seek time for a write.
So the single read and two writes associated with the mirror in RAID
Level 1 takes the same time as the single read/write in a single drive
case. Coupled with the improvement in the read only case, the overall
result is that the optimized RAID 1 has slightly lower average access
times than a single drive.

In a multitasking system, we can take a different approach. Since we
have two complete sets of data by RAID 1 definition, we can satisfy two
read requests simultaneously by sending one to each drive. In a situation
where the system is saturated with read requests, twice as many requests
will be processed in a given time period and the apparent seek time will
be half that of a single drive. However, it is obvious that this speedup
falls apart once a write request is received. In RAID Level 1, the write
must be made to both drives and the parallel operations are interrupted.
Whether this method will yield better results than the simpler approach
in the paragraph above depends upon the ratio of reads to writes and
the size of the transfers. Careful analysis of the actual target
application should be made before it is adopted.

The primary advantage of RAID 1 over other types of RAID architectures
is its simplicity. It does not provide any significant performance
improvement, but it does provide easily integrated data redundancy.
RAID 1 can be implemented by a dual channel controller or a minimal
device driver using one or two controllers without any changes to
the operating system or it can be implemented on a filesystem level.

RAID 1 has two disadvantages. The most serious is cost. RAID
implementations have three cost components: special software drivers,
custom controllers, and disk overhead, the cost of storing the redundant
data. In RAID 1, the cost of software drivers and controllers is low or
the same as a single drive, but this more than offset by the 50% disk
overhead. The second problem area is packaging. To achieve the same
amount of usable storage space, a RAID 1 requires either twice as many
drives or larger drives than a conventional system. Either approach
requires significantly more power and usually requires more physical
space to mount.