The use of dedicated ECC / parity drives in RAID levels 1 through 4 limits each of these
architectures to a single write transaction at a time, and thus they are poor choices for
multitasking or transaction processing systems. RAID 5 attempts to eliminate this
problem. In RAID 5, an entire transfer block is placed on a single drive, but there are no
dedicated data or parity drives. Rather, the ECC blocks are distributed, as shown in
the diagram below, so that each drive in the array contains a combination of
data and parity blocks. 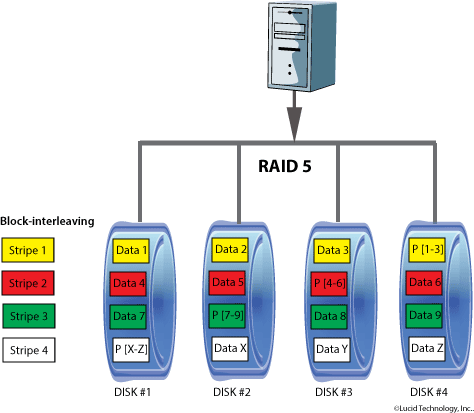 Data recovery and seek times are the same as for RAID 4, except that now we
can perform multiple write transactions in parallel. In a saturated I/O situation, we could
have half as many write transactions as the number of drives.