A Level 3 RAID architecture assumes that each disk drive in the array can detect and report errors.
Therefore, the RAID architecture needs only be concerned with maintaining the redundant data
necessary to correct the error. In RAID 3, we have two or more data disks and one ECC/parity disk. Data is interleaved across all of the data drives, so that the first byte is on the first drive, the second byte is on the second drive, and so on: 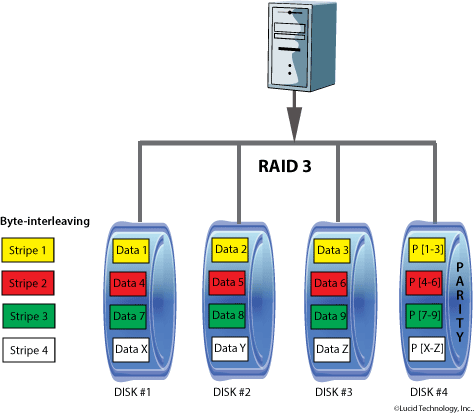 If we have ‘n’ data drives, the ‘n’+ 1st byte is back on the first drive, etc. until we have a block of data n-times the single drive sector size interleaved across the ‘n’ data drives. A single dedicated parity drive is used. Each logical sector of the ECC drive contains the bit-wise exclusive-or (XOR) of the corresponding sector from each data drive. This is the same scheme as is used in parity memory.

When a data sector is unreadable, or when an entire drive fails, the data for that
drive can be reconstructed by computing the exclusive-or (XOR) of all of the remaining drives
(including the ECC drive).

Data reads require that all of the data disk drives seek to the proper location and
thus the effective seek time is subject to the slowdowns. Write transactions require a read transaction, a seek by all drives, including the ECC drive, and a write to all of the drives.

The primary advantage of a RAID 3 is that it has the same high transfer rates that
we discussed for RAID 2. It is well suited for most applications requiring sustained high-speed transfers.

Achieving the high transfer rate results in two main disadvantages:
Every data drive is involved in every read or write transaction. Therefore, a RAID 3 can
process only one I/O transaction at a time. Secondly, the logical sector size of the RAID
3 gets larger every time we add another data disk. Even if the individual drives have a
small sector size, say 256 bytes, a RAID 3 with six data drives has a logical sector size of
1536 bytes. This means that in a transaction processing system, we often have to read
a lot of data in order to get the small amount of data that we are really interested in. It
also creates integration problems for operating systems that maintain their disk caches,
since a sector size like the 1536 above is usually not accommodated.

RAID Level 3 works well for applications that require fast sequential access to a single large file,
such as image or video processing systems, where the data has been collated and organized by pre-processing so that it can be used directly by the processor. It performs poorly where the I/O transactions are for small amounts of data, or where requests for multiple files are interspersed. Thus, it is a poor alternative for any transaction or multitasking system, such as database, file servers, or general purpose workstations.