We said that the two primary disadvantages of the RAID 3 architecture were the large (and/or inconsistent) transfer block sizes and the inability to perform multiple simultaneous I/O transactions. Both of these problems result from the fact that a single transfer block of data is interleaved across all of the data drives. 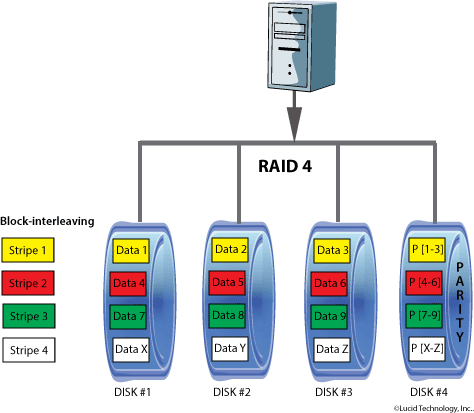 In the event of unreadable data, the lost sector/drive is reconstituted by computing the exclusive-or of the remaining drives.

A read transaction involves only a single data drive and the timing is identical to a single drive configuration. Also, since only one drive is involved, a multitasking operating system could issue an independent read transaction against each data drive. This means that in a saturated I/O environment, with ‘n’ data drives, ‘n’ times as many seeks will complete during a given interval. So a RAID Level 4 array with 6 data drives, each with a mean access time of 12ms will have a virtual access time that approaches 2ms as system loading increases. This effect has been seen for years in benchmarking of operating systems such as Unix, where parallel operations on multiple drives are supported. However, achieving it in practice has required two conditions. First, you have to be able to segregate the data into distinct subsets for inclusion on different drives, and secondly, the system administrator has to have a good enough understanding of how and when the data is used so that an effective segregation is achieved. A RAID 4 makes the allocation to distinct drives automatic, since each and every file is automatically distributed.

Contrary to initial inclinations, a write transaction does not involve all of the drives. It requires reads and writes of the data drive involved and the parity disk. Because the existing ECC block already contains information about the other data drives, the following mechanism can be used:

The primary advantage of RAID 4 is the ability to process multiple simultaneous reads. This
makes it extremely efficient for transaction or multitasking systems where the ratio of reads to
writes is very high. The disadvantage is that it can only process one write transaction at a time. Single parity drive becomes a bottleneck in RAID Level 4.